Alaska Airlines has made this announcement:

Microsoft Corporation employees who fly between their global headquarters in Redmond, Washington, and California on Alaska Airlines will fly more sustainably thanks to the use of sustainable aviation fuel (SAF) to cover their business travel. The SAF, supplied by SkyNRG, is an important option for the aviation industry to reduce CO2 emissions on a life-cycle basis. This first U.S. partnership of its kind is a model for other companies and organizations committed to reducing the environmental impact of business air travel.

“After a decade advancing sustainable aviation fuel, this partnership marks a significant milestone in the work to make SAF a commercially-viable aviation fuel alternative,” said Brad Tilden, CEO of Alaska Airlines. “SAF enables us to fly cleaner and reduce our impact on the environment. However, we cannot do this alone — we must work together with other industries and business leaders like Microsoft and SkyNRG, among others who are thinking big, to achieve our goals and grow the marketplace for SAF.”

“We are excited to partner with Alaska Airlines to make business air travel a little greener by using sustainable aviation fuel supplied by SkyNRG to reduce the carbon impact of the flights Microsoft employees fly most,” said Judson Althoff, executive vice president of Microsoft’s Worldwide Commercial Business. “We hope this sustainable aviation fuel model will be used by other companies as a way to reduce the environmental impact of their business travel.”

Microsoft, Alaska Airlines and SkyNRG hope this partnership sets an example for other companies and organizations to purchase SAF, and support the development of the SAF industry by creating a stable demand signal, increasing supply and reducing the cost of SAF. The three companies are also supporting the development of a global environmental accounting standard for voluntary corporate SAF purchases through their participation in a pilot project of the World Economic Forum’s Clean Skies for Tomorrow initiative. The companies plan to hold supplier and corporate forums to share learnings and increase interest in using SAF to lower the carbon emissions from business travel.

Alaska Airlines is one of the most fuel-efficient airlines in the U.S. with a strong commitment to sustainability. It was among the first airlines to use SAF in passenger travel, flying nearly 80 flights over the past 10 years. With a fuel-efficient fleet and use of modern technology in the flight deck, Alaska Airlines has reduced its intensity target of greenhouse gas emissions by 16% since 2012. Learn more about the partnership at https://blog.alaskaair.com/company-news/fly-greener/alaska-microsoft-reducing-carbon-footprint/.

Microsoft has ambitious sustainability goals, including a commitment to be carbon negative by 2030 and remove from the environment more carbon than they have emitted since its founding by 2050. The purchase and use of SAF contributes to the company’s sustainability goals.

For more than a decade SkyNRG has led the development in creating a SAF market, taking a no-compromise approach to sustainability. Replacing fossil jet fuels with SAF is what SkyNRG aims for, guaranteeing social and environmental sustainability throughout the supply chain.

“The emergence of a SAF production system and market is a once-in-a-century opportunity to launch a new energy source for an entire industry, guided by strong sustainability standards from day one,” said Theye Veen, managing director, SkyNRG. “We are very pleased to be joined by leading companies Microsoft and Alaska Airlines in this next step.”

As part of Microsoft’s partnership agreement with SkyNRG, Microsoft will become the newest member of Board Now, a coalition of leading companies that aims to accelerate the transition to sustainable air travel. Organizations commit to reducing carbon emissions from flying and directly contribute to the development of new SAF production capacity.

Rather than being refined from petroleum, SAF is generally produced from sustainable resources, like waste oils and agricultural residues. It can even be produced from carbon captured from the air. SAF is an important solution for the aviation industry to reduce CO2 emissions and can also contribute to other positive social and environmental benefits, such as job creation and biodiversity. SAF results in a reduction in carbon emissions across its lifecycle. The SAF supplied by SkyNRG under this agreement is produced in the U.S. by World Energy using waste oils and delivers a carbon reduction of approximately 75% compared with fossil jet fuel. SkyNRG guarantees the sustainability of the fuel it supplies through its certification from the Roundtable on Sustainable Biomaterials (RSB), the most complete and robust standard for verification of sustainable practices, and its independent Sustainability Board, which includes representatives from WWF International, the European Climate Foundation, Solidaridad Network and the University of Groningen.

More from the Alaska Airlines blog:

Alaska Airlines and Microsoft will fly more sustainably thanks to the use of sustainable aviation fuel (SAF) supplied by SkyNRG to cover Microsoft employee travel on the routes they fly most. Microsoft has ambitious sustainability goals, including a commitment to be carbon negative by 2030 and remove all historical carbon emissions by 2050. We’re grateful for the opportunity to support them on this path.

SAF is produced from sustainable resources, including feedstocks and waste oils, and is an important way for the aviation industry to reduce CO2 emissions on a life cycle basis.

“As an airline, we are responsible for reducing the negative environmental impacts of air travel in our community and the communities where we operate. To do that, we’re focused on ongoing efforts to improve our operational efficiency, including growing our use and the market for SAF,” said Diana Birkett Rakow, vice president of external relations at Alaska Airlines. “We believe deeply in the transformational benefits of air travel. It’s what connects people—and helps communities worldwide grow and thrive. We know to continue to deliver these benefits, we must operate sustainably.” 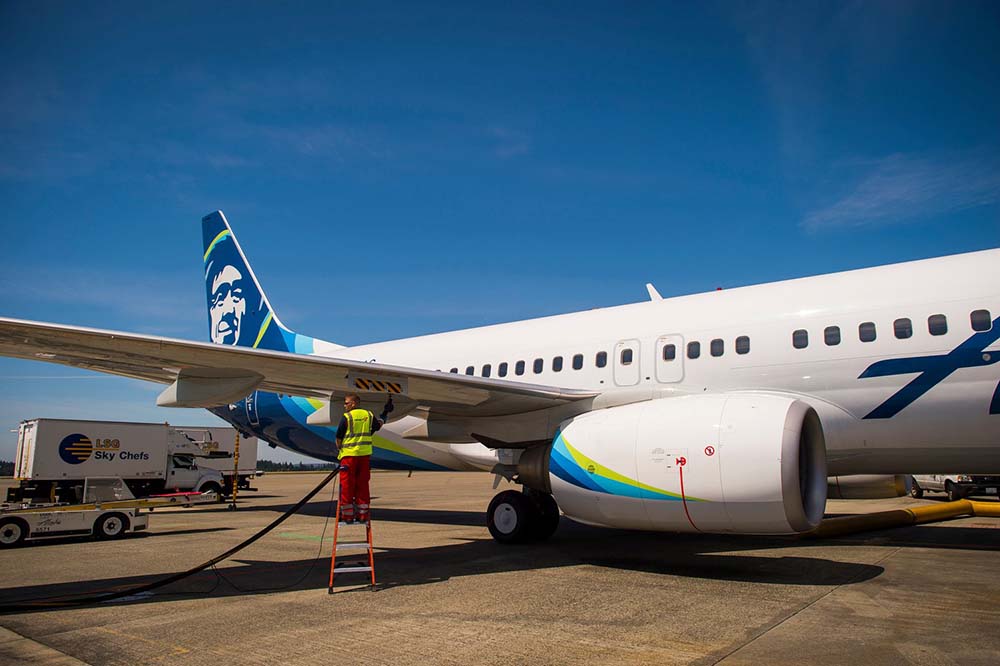 We’re excited about this milestone and remain committed to a long journey of reducing carbon emissions, including creating a marketplace for SAF, especially here in the Pacific Northwest. More than a decade ago, we were one of the first airlines to demonstrate the use of SAF in passenger travel, and by managing a fuel-efficient fleet and using technology to make flight paths most efficient, we have reduced its intensity target of Greenhouse Gas emissions by 16% since 2012. But there is a lot more work to do, and many partners on this journey, from airports like our home hub SEA to California hubs and research institutions.

So today, we also announced a two-year investment with Washington State University to support additional research at the WSU-PNNL Bioproducts Institute to advance the mid- and long-term development of SAF as an economically viable option, particularly in the Pacific Northwest.

What if I don’t work for Microsoft, but want to offset your carbon footprint? Good news! Travelers can invest in carbon offsets from

our new partner The Good Traveler, which is then invests in carbon reduction projects that restore the climate balance. Since the inception of the program, more than 667 million miles have been flown and with the help of The Good Traveler – who also partners with airports from SEA to SFO and beyond – and 229 million pounds of CO2 has been removed from the air through funding projects like planting trees, protecting habitats, composting waste and using renewable energy.

Jazz to become the sole Express operator for Air Canada

Ryanair Gets Ready To Bid For Munich And Frankfurt Slots

Why Qatar Airways Is Asking Its Pilots To Taxi On One...

ABOUT US
This is an online news portal that aims to share Aviation, Airline, and Pilot news. Feel free to get in touch with us. We're providing daily updates about these topics.
FOLLOW US
© 2020 - air-professionals.com - All rights reserved!
MORE STORIES

ANA to temporarily change service on select international routes due to...